WHAT IS FIVE RIVERS WORTH TO YOU? 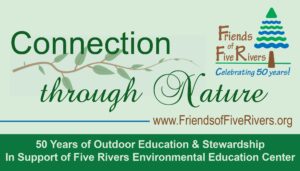 Below are stories people have shared of their fond memories here at Five Rivers Environmental Education Center over the years.  Enjoy, reading, learning, and reminiscing.

If you wish to share a story yourself, please email development@friendsoffiverivers.org.

Our family has been visiting Five Rivers since 1985.   We have hiked, skied, snowshoed, birdwatched, attended wildlife presentations, volunteered, and have done trailwork.  As we relax on benches amongst the four hundred and fifty acres, time can stand still and the natural world brings us peace.

When my younger daughter was about six years old she remembers being the first one to find a spring peeper during an evening walk.  My older daughter cherishes the guided walks with her girl scout group especially around Beaver Pond.

Being guided by The Friends’ volunteers and DEC naturalists feels like spending an enjoyable time with an extended family, sharing a special event at a miraculous place that becomes a wonderful memory.

After completing a white-tailed deer study in the Adirondacks in 1937, my father, Robert W. Darrow, was transferred to the Wildlife Research Center and Game Farm in Delmar.  He was among a group of young, mostly Cornell wildlife biologists, who came here to the CCC camp buildings to continue their research.  This included the continuation of the Ruffed Grouse Survery begun on Connecticut Hill.  They settled mostly in the Elsmere/Delmar area with their young families.

At that time, the property was not open to the public since it was strictly a research facility.

Steve Fordham, the caretaker of the property, lived with his family in the white house, now office space, by the Upper Pond.  One of my early memories is playing on that beautiful green lawn and watching various ducks and birds and learning their names.  It was a much different pond before nature took over and choked the open space.

Entry to the laboratory was quite a learning experience.  I can still visualize the shelves, which held large jars of animal specimens floating in formaldehyde, accompanied by an aroma which was quite unpleasant.  There were several incubators hodling eggs where I could marvel at the various stages of their development.  Some were for Canada geese.  Fascinating sights at every turn.

Largely overgrown now, remnants of the deer pens still remain, but I remember seeing the deer up close when I might give them a crab apple.

Dad and I took hikes with binoculars, perhaps a net for a butterfly or tadpoles, all without ever seeing another person.   I think he could identify all the fish, birds, animals, plants, and trees we ever encountered.  Today, in hindsight, I realize how naive I was to have had the privilege of frequent access to what has grown to the Five Rivers we know today.

Years later, my own children got to visit a much different landscape and they delighted in exploring the trails.  Then their children came and experienced an evolving atmosphere of hands-on learning.  Five Rivers is firmly in the DNA of four generations of my family.

When I look at the Hall of Fame photos at the entrance to the Visitor’s Cnter, I pause at the names and pictures of so many men and women who were an integral part of my growing up.  I am forever grateful for their friendship and what they taught me.  They would be so proud to see what has grown from the foundation they built on this unique property.

A Grateful Heart for Five Rivers

As a child, I attended summer camp and fell in love with nature and its complexities, mysteries, and beauty.  However, this passion was never fully developed as my parents hadn’t the time nor the inclination to explore or enlighten me further in my desire to study and learn about the great outdoors.

When I became a parent, I rejoiced over the fact that Five Rivers Environmental Education Center was merely a short drive from our Delmar home.  I decided with excitement and determination to include and share nature walks and Five River Classes with my three children, and subsequently, to renew and amplify my own understanding of this wondrous earth.  On many of our winter walks, when the wind would howl and the snow would blow, we would journey farther and farther into the woods feeling carefree and daring

As a grandparent, I further influenced the younger generation with enthusiastic nature exploration and conversations about the importance of respect and protection of the natural world.  My knowledge of it had expanded greatly through being a Five Rivers volunteer instructor, and my family had been the beneficiaries.  Opportunities to share and teach at my grandkids’ elementary school classes, girl scout meetings, and summer camp outings were frequently requested of me.  It was a simple matter of reviewing my Five Rivers teaching notes on Exploring the Outdoors or Animal Signs to lead a class, which engaged and ignited the interest of kids.  My dream of understanding nature at a more advanced level and sharing it with children was fulfilled.

There is a profound spiritual aspect that Five Rivers bestows upon me, especially during my very essential and very quiet, solitary walks.  The revelation and experience of God’s presence inhabits the various plants, animals, water, sky, air, and clouds magnifying the senses with sights and sounds of the divine.  I walk in appreciation and celebration of Five Rivers and am forever grateful.

Five Rivers was my grieving place, a place where comfort and solace were unspoken but deeply experienced.

During my husband’s brief but intense illness, I was in denial that there would come a day when he would be gone.  But that day came in the darkness of late December.  And then January’s despair kicked in.   Not knowing what to do with myself, I sought out trees living together in a forest because Jerry had loved and devoted his entire 30 years career to caring for forests. I chose to go to Five Rivers because I felt safe there.  As I trudged alone in the deep snow drifts, I was strangely comforted by the blistering wintry winds and blowing snow, allowing the winds to whip across my face and pierce my jacket.   The trees were somber companions.  My grief was accepted here.    And in the apparent “dead” or dormancy of winter, I was reminded by the trees’ steadfast forbearance against the driving winds, to not be afraid to feel the full despair of grief.  It would not kill me.  Because life goes on, Spring will come.

The trees’ ancient knowledge is that death is not apart from life, it is part of a greater journey that all living beings share as we cycle through our own seasons.

Sigrin Newell started volunteering when Five Rivers was still a Game Farm.  With others, she worked to create a new environmental center. Sigrindesigned, and with a group of students from Bethlehem High School, built the first path around the pond. Sigrin named it the Beaver Tree Trail and wrote the first trail guide. The first winter, there was almost no heat in the main building, but nevertheless, she and two others designed field trips and recruited local schools to bring students to the new environmental center.  We purchased snowshoes, but had only mud to walk on all winter. Sigrin was one of the founders of Five Rivers Limited and served on the board from 1972-1975.